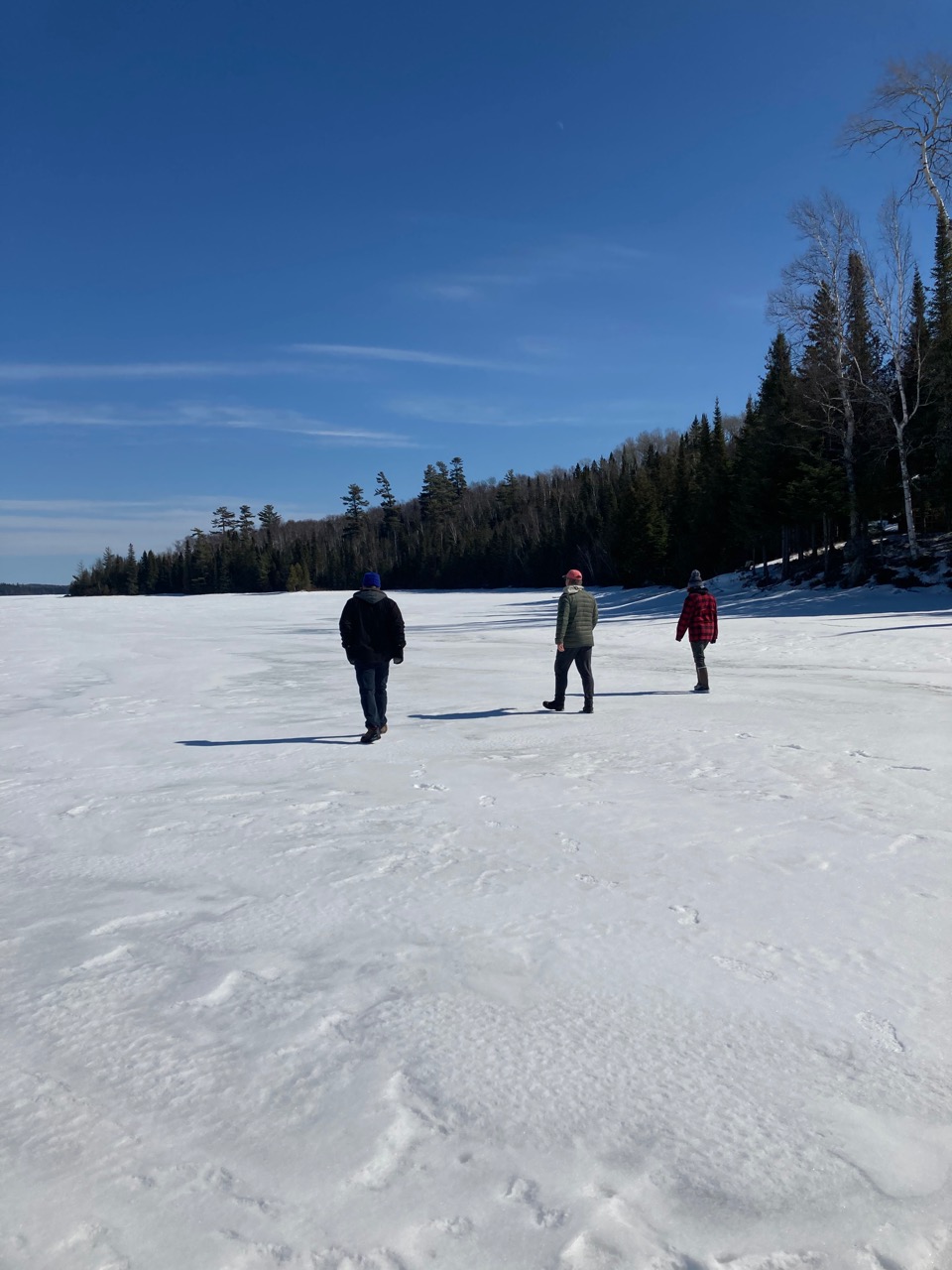 While my main pals over here in Lochalsh are foxes and fishers, I do get the human occasional visitor. My family travelled north by train to see me the other week for March Break!

My parents and my brother Jonathan (who worked at the lodge in 2016 and 2017) boarded the Budd Car in Sudbury. I met them at the tracks with my Ski-Doo and sleigh. The train runs year-round, but is still only scheduled to run once a week due to COVID.

I was wondering if my fox friends would be too hesitant to approach multiple people, as sometimes they are flighty seeing or hearing just me. It turned out to be the opposite— the foxes were extremely curious, watching us through the window at night. Whenever we were out in the yard, the foxes came to visit and walked around us without hesitation. Terry is no longer spooked by snowmobiles, and sat in the yard to watch me warm up the machine, and jumped around on the trail as I rode near the house. Sasha was very outgoing and stuck around to hunt squirrels. We also saw the fisher, Mr. Nibbles. We tried to roll a dog toy around with the foxes, but they were not that interested.

We rode around on the Ski-Doo a bit. There was still enough snow on the ground, but conditions were either slush or ice.

At the beginning of the week, we still had enough snow to snowshoe— though snowshoes were not that necessary when the roads have been packed down well by snowmobiles and my previous snowshoe adventures. We ventured over to Clear Lake, which was perhaps not the best choice after there had been ice rain days before. I fell down the hill and just let myself slide; my snowshoes do have good crampons on the bottom but even they failed to help me.

In the following days, we walked around instead. We ventured to Godin Lake to explore some of the drilling sites. We went on an adventure to Jean Lake (behind Sandy Bay).

We planned to hike to Manitou Mountain, but as I hadn’t been up there since the summer, I didn’t know how deep the snow might be. The beginning of the trail was not as difficult as we expected, as a moose had walked it and packed it down some time before. We did not need snowshoes. On the higher reaches of the trail, which cross bare stretches of rock, we encountered knee-deep snow and stumbled through. Snowshoes would have been nice there! The summit gave us an amazing view of frozen Wabatongushi Lake. The view is always worth the hike, but I have to admit that it is not the most attractive looking down at bare trees and mucky ground compared to the spring bloom or fall colours. Regardless, we had fun and the sun was shining bright. No Bigfoots (Bigfeet?) were sighted.

We also crossed Wabatongushi to check out the cabins on Otter Island. Everything was in good order. We sat out on the deck of the small cabin and took in the sunlight. It was very windy as we crossed back to Camp Lochalsh, and the ice was slick, but we made it!

We had a big turkey dinner, complete with pumpkin pie and homemade cranberry sauce. We did enjoy some outdoors cooking as well, and debated over whether the classic s’more or a s’more with Nutella replacing chocolate chunks was superior.

The End of the Week

The train broke down on its way back up to White River, so it was uncertain as to whether my family would be able to leave for Sudbury the next day. Dispatch had no answers for us. Thankfully, the train was running on time (actually early) in the morning, and they made it home safely.

As of this past week, the snow is almost gone. It has been raining for days now and everything is a mess of mud and slush and ice. I have things to keep me occupied indoors; right now I’m making some new curtains for cabins.

Currently none of us have news on the border, but it is encouraging to see that vaccination rates are going up on both sides. Tourism associations continue to advocate for a clear border re-opening plan and business regulations and assistance.

Thanks again for reading!

Catch up on other weeks of the blog here:

2 thoughts on “Winter at Wabatongushi #6”