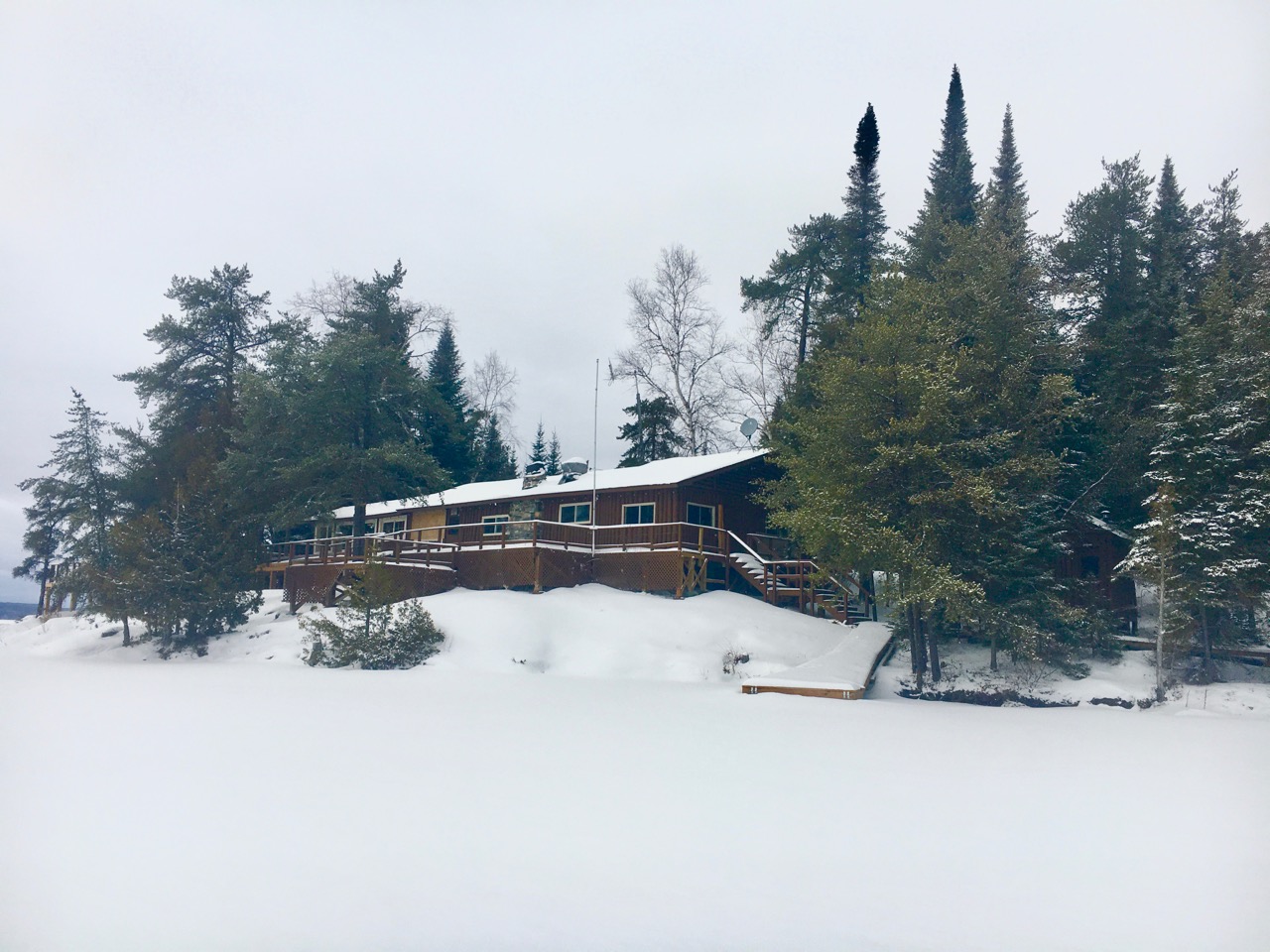 Here I am with another week of experiences at Lochalsh. More snow is falling, temperatures are sinking, and it’s breakdown time! I’m not talking psychological…

Last weekend, I was out snowmobiling around the Magpie River with longtime friends of the lodge, Roger and Marielle. They showed me around the trails on the other side of Dubreuilville, and it was a great afternoon of riding, albeit slushy on the ice and very rough on the ground due to a lack of decent snow depth.

Heading home from Dubreuilville on the 48 Road early that night, my Ski-Doo suddenly lost power and shut itself and its brilliant headlights down, plunging me into darkness. The land was pitch black, with overcast skies spitting down a bit of snow.

I had my headlamp charged and ready, as well as the camp satellite phone, which I carry on my adventures. I called Roger immediately, as I knew he anticipated hearing from me once I reached my house. While I waited for him, I investigated what I could, not being that mechanically inclined– the problem didn’t seem to be related to fuel or oil. I paced around with my headlamp on the dimmest setting, wondering how quickly the cold might drain the battery; equipment can be not-so-reliable in winter temperatures. I’d dressed warmly, and had things to start a fire with if I did feel cold (but sadly, I had no snacks on board). I also carry a knife, saw, and hatchet if I need to make a shelter or an animal approaches.

Roger came by and took a look. We changed the spark plugs, thinking one might be fouled, but that wasn’t the case; they weren’t getting any fuel. Roger got the machine started, but it ran very roughly, just for long enough to pull it over to the side of the road. We left it for the night, and in the morning he was able to drive out and load it onto a trailer. The one positive of the situation was that this breakdown happened on a road instead of kilometres down a trail (the 48 Road is plowed occasionally as an alternate access road for the gold mine, but isn’t sanded, keeping it suitable for snowmobiles). After an appraisal in Dubreuilville, it was determined that a piston was damaged and the Ski-Doo would have to go to a dealership. The two choices are both hours away: Hearst to the north or Sault Ste. Marie to the south. And with businesses still in lockdown here, arranging for services isn’t fast. Soon Roger will be taking it to Hearst, and the mechanic there will see exactly what went wrong.

Situations like this solidify the point of being prepared. I always charge the satellite phone before I leave the house, but as electronics can fail and trees often block reception, I also dress warmly and carry a pack of basic gear. I also tell someone where I’m going. With my primary transportation out of commission, it’s comforting to know that I have a sufficient supply of food at my house and don’t need someone else to bring me groceries. If there is an emergency, I know there are people around who will come to help me.

The ice is safe to go out on now, as temperatures have been much colder (it’s -3 F/ -20 C as I write this on Friday afternoon), so the other day Roger and I went up to check on Loch Island.

Loch Island Lodge in the snow

Loch Island Lodge in the snow

To entertain myself and cope with the loss, I’ve been going snowshoeing. I became interested in snowshoeing a few winters ago, going to college in North Bay, where there was not much to do except snowshoe. It’s a great workout, and really the only other way to travel besides snowmobiling. I splurged on 30″ snowshoes for this year, and am quite happy with the length and stride versus the 25″ pair I had. I’d like to get a pair of traditional wooden ones, but I’ve always used the lightweight aluminum and plastic type which have crampons built into the bottoms.

The other week, I went to Bren Lake, where some of the bear stands are (note that black bears hibernate).

This week, I attempted to go to Burns Lake, which is past Manitou Mountain. There is a trail all the way, but the snow is getting deep back there and some brush was overgrown. At the first attempt, it was -3 F/ -20 C out and I was carrying my full pack. I made it to Manitou Mountain, then knew I had to turn around. A few days later, with the temperature just below freezing and just a small pack of gear, I made it to Burns Lake. The way back is always easier on the packed trail!

I have historical records of some of these paths existing in the early 1900s for mining and railroad construction, so venturing down them is a moment of historical introspection, wondering who walked there before me.

It’s not frightening to be alone. The most unnerving part is the constant silence and dimness. Even with the sun shining, it’s quite dark out. In the bush, I can’t see that far to either side of me; the brush and branches are tangled and weighed down by snow. A certain distance off, it all fades into black.

Last week, I saw in the comments that a few people were asking me about wildlife. I haven’t seen or heard a wolf yet, surprisingly. There was a lynx around in November. I see many moose tracks in the snow now, but the moose are nocturnal, a big danger on the snowmobile trails. Rabbit and partridge populations are back up. Most animals are nocturnal, and I don’t go out in the dark, so I don’t see much.

Foxes are the most common wildlife that I see, and they are very curious and playful creatures!

In October and November, a beautiful cross fox (a melanistic variant of the red fox) visited my house each afternoon. I gave her some meat. She liked moose the most! She was very curious, and was not afraid of my voice. I called her Sasha. I could stand within a few feet of her and watch her eat, but definitely didn’t try to pet her, and would not let her into the house. She sat in the yard, waited for a mouse to run by, and hunted it! One day, when I was coming back from camp on the ATV, I saw her waiting by the tracks. She recognized me and walked towards me, cautious about the sound. Sadly, I haven’t seen her since late November, so either she’s wandering around very late at night or has perished or moved territories.

The camp cameras have picked up a red fox hunting around the cabins in the snow, and a red fox stopped by my house this week, but is much more flighty than the other fox. I will try to take some photos next time it stops by!

My other close encounter of the wildlife kind is this one squirrel who hangs around my house…at least I think it’s the same one each time. It likes to sit in the porch rafters and watch me gather firewood to take inside. One day, it slipped inside the house, and I only noticed later that someone else was watching TV with me! I tried to trap it in a box with food, bang on a pot to scare it, and chase it out, but it hid behind the freezer. Eventually it left on its own accord. Last week, as I was about to go to bed, I heard a noise in the kitchen. I turned the lights back on and saw a squirrel swimming its way across the ceiling between the insulation and plastic vapour barrier (parts of the ceiling are exposed in the midst of tile replacement). I knocked on the wall with a broom to scare it, and haven’t seen it since. Squirrels have the most audacity out of all the animals. I’m waiting for the fox to come by and eat that rat.

Keep an Eye Out for More!

Thank you again for reading. It was wonderful to hear from so many people in the comments and on Facebook last week. Again, if you have any comments or questions about specific things, let me know, and I’ll answer.

22 thoughts on “Winter at Wabatongushi #2”