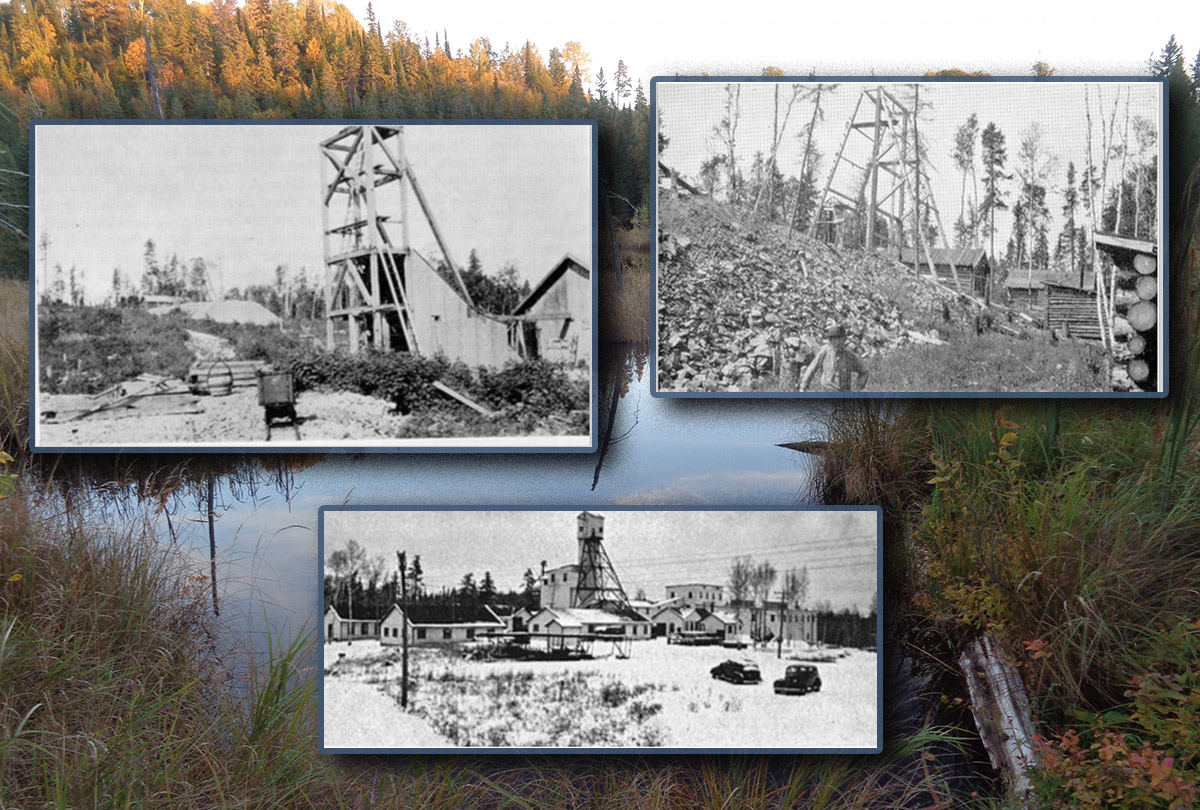 Driving down the gravel roads snaking to Camp Lochalsh, you’ll see a number of overgrown turn-offs into the trees. These now-lesser-travelled trails lead to the early mines which put the Lochalsh-Goudreau region on the map during its gold rush in the first decades of the 1900s. The mine featured in this post will be the Cline Mine.

There are a number of notable mines hidden just off the winding roads, aside from the present Alamos gold mine which has visible infrastructure along the way. Many of these roads have a long history, as some were first cut out as construction access roads in the 1870s for the Canadian Pacific Railway, and further tracked by surveyors and prospectors.

Driving in from Dubreuilville, the Cline Mine is accessed on the Lochalsh Road a short while before Indian Lake, through a non-suspect turnoff to the right. Within a moment you can see Cline Lake and the foundations of the mining operation.

One of the shafts was not filled in after mine closure, and looms in a thicket of trees. It was fenced off for safety purposes. Here are some photos from an October expedition to the site!

So what is the history of this hidden place?

Iron mining started in the Michipicoten area in the 1860s but was limited. By the 1890s, the vicinity was discovered to hold incredible amounts of gold and iron, spurring a rush of prospectors. While some stayed in Michipicoten and built infrastructure or worked at the established mines— or went home after seeing the challenges ahead!— others went towards the promising Goudreau-Lochalsh region for gold (Gledhill, 1927, p. 1-7).

The CPR line–– the very same which crosses Camp Lochalsh’s driveway and runs the Budd Car for tourists today–– and the Algoma Central Railway allowed for improved access to claims, and steamboats took passengers across larger lakes such as Wawa Lake and Dog Lake, or up to Wawa from Sault Ste. Marie. From the more remote train stations such as Missanabie, prospectors could hire canoe guides or follow the “tote-roads” between lakes. Main rivers and water bodies were dammed for hydroelectric power for the local mines, so water routes were changing (Gledhill, 1927, p. 7).

Prospector James Cline staked claims near Lochalsh in 1918 and opened the Cline Lake Gold Mine. Until 1925, he explored for gold with moderate success. A company town called the Town of Cline Lake Mines was built but soon deserted. In 1936, the property was reopened by a larger company and staffed by 200 people, and expanded to include twenty residences, plus bunkhouses and a school. Many families lived on site (OntarioExplorations101 Global Surveyors, n.d.).

The most prosperous period was 1938-1942. The deepest shaft was 1196 ft. Cline Mine’s largest output was gold, but silver was another product, as well as molybdenum, used in steel alloys (Ministry of Energy, Northern Development and Mines, 2019).

Robberies, Tragedies, and Daily Life at Cline Mine

We’ve found a few stories of what life was like at Cline in its heyday.

Life at the mine could be dangerous for all family members, as told to the rest of Ontario through the widely-circulated newspaper The Globe and Mail. Archived articles detail one community tragedy. In June 1940, Hope Matvenko, who was two and a half years old, was struck by a vehicle while playing, then taken by train to the hospital at Hawk Junction. Dr. E. Paksody from the Helen Mine (in Wawa) determined that she needed advanced care. At this time, the Ontario Air Service had an aerial firefighting base at Oba Lake, just north of Wabatongushi Lake, so pilot W.H. Westaway offered to rush her to Sault Ste. Marie. He loaded Hope and Dr. Pakosdy onto a float plane at Hawk Lake. The flight never arrived in the Sault. The wreck was found four days later and Hope had perished, leading to a coroner’s inquest. Dr. Pakosdy testified that the pilot attempted a forced landing due to inclement weather, the plane crashed, and all passengers were submerged in a lake. Hope hadn’t drowned, but died before the crash despite his best medical attempts. The coroner and a jury ruled her death accidental.

In Dan Douglas and Judith Turnbull’s book Northern Algoma: A People’s History, Lochalsh resident Alma Lavoie, who raised a family at Cline Mine from 1937 onwards, recalled that Cline employees arranged robbery schemes. There was no bank established in the area, so payroll money would be brought in by the ACR train to Goudreau, a nearby mining community (which will be mentioned in a future post), then driven down the road to Cline. Cline employees plotted to steal the payroll by setting up a roadblock and threatening to blow up the mine manager’s vehicle as he returned from picking up the money. The manager simply did not give them the money, and turned around! The employees then robbed the safe from the railway freight shed in Goudreau and removed the money before fleeing. The employees responsible were never caught (Douglas and Turnbull, 1996, p. 123-24).

Despite the challenges of life, the residents of Cline did have enjoyable times. The hotels in Franz and Lochalsh were centres for music, drinking, and dancing. Alma also reported that organized sports were very popular. Broom ball, hockey, and baseball teams from Cline and the other mines, plus the towns of Lochalsh, Missanabie, Franz, and White River competed with each other (Douglas and Turnbull, 1996, p. 123-24).

When World War Two began, Cline Mine drastically lowered its output, and was closed on October 8, 1942 (Ministry of Energy, Northern Development and Mines, 2019). The company town was demolished in 1946 (Douglas and Turnbull, 1996, p. 124) and all that remains now are the concrete foundations of its machinery, and shafts which were either sealed or fenced off.

It’s at this point that the sensational gold boom in the whole of the Lochalsh area faded— but residents such as the Lavoie family stayed on, and wilderness tourism became increasingly popular, leading to the construction of Camp Lochalsh in the 1950s. Dubreuilville would be established as a logging town in the 1960s. The Cline Mine, at one time renamed the Pick Mine, was purchased and sold between several companies that did surveys and drilling, but did not reopen the property (Ministry of Energy, Northern Development and Mines, 2019).

Stay tuned for more history on the other mines of Lochalsh!

— If you have any information about local history, please share!

Director sure mercy flight will succeed: Thinks overdue plane with injured child will reach Sault. (1940, June 25). The Globe and Mail, 20.

OntarioExplorations101 Global Surveyors (n.d.). Cline Lake Mines Ontario history: Once was a small town in the mid-1920’s to the late 1930’s. https://www.ontarioexplorations101.com/cline-lake-mines-ontario-history.html.

4 thoughts on “Lochalsh Local History: The Cline Mine”