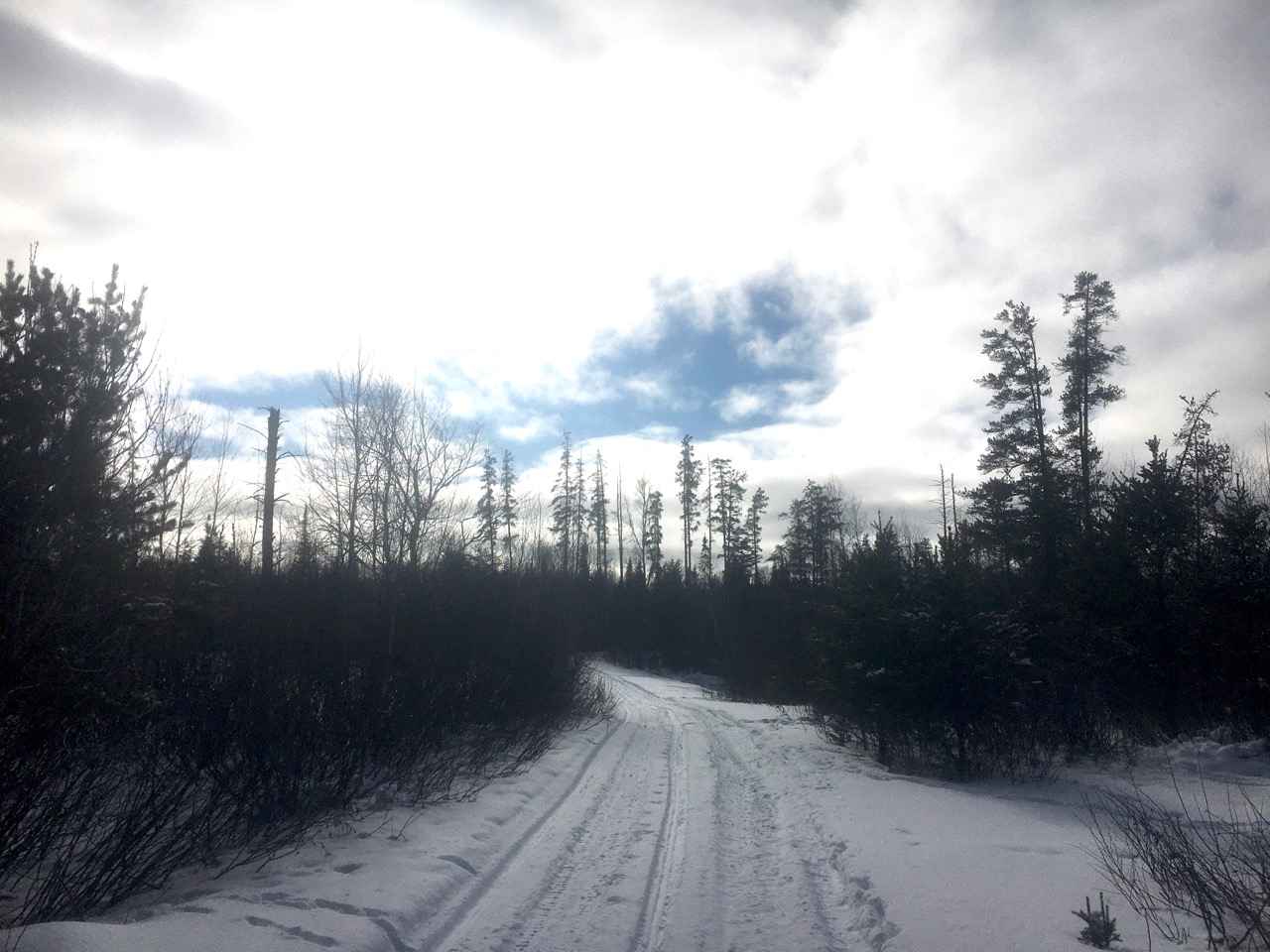 Greetings from Lochalsh in these last days of January! At the end of the month, I’ll have made it halfway through the winter season and this little project of mine. Time here is an odd sensation. Either days pass with little indication aside from what television show is on and weeks– if not months– are suddenly gone, or one blue sky afternoon seems to last for eons.

To reflect on this halfway point…

I’m constantly asked if I’m afraid out here by myself. There are many dangers to consider. There are predators and large animals. The weather can turn severe quickly. Wood stoves and propane ranges have their own risks. The darkness is untinged by urban lights. Being isolated is a fear for many people in itself. The planning that I did in the fall gives me a certain level of assurance that I’ll have food and shelter unless there is a major disaster which would entail leaving the property. I’ve done what I can, and the rest is up to fate and reasoned daily decisions. Sometimes I have hesitations, but I wouldn’t say I’ve been absolutely terrified.

The primary feeling that I have out here is constant psychological overstimulation. This feeling is not new, but it is much more intense than it is in the summertime, when there are other people to deflect it. I have seen new employees (most often coming from an urban background) struggle with it to the point of all but shutting down. Sometimes it is overwhelming to realize how large the outside world is, how many new details can be noticed each time I look at something, and how many threats or points of interest there could be. There are few buildings, advertisements, vehicles, stores, and other people to dull the nonstop exposure to the natural world. I’ve been fishing and boating on Wabatongushi Lake for seven years now, and every time I go out, I notice a new tree or rock face. I rarely have the thought that I’m the only person within a radius of however many miles, but when I do, I face it with the it-is-what-it-is attitude rather than sheer panic.

It’s very easy to lose track of time; so far the experience has seemed like I’m not quite settled into the house yet, but it’s also been a long three months. Living in this paradox requires structure. I feel a strong creative energy, and I try to channel it into a focal point like writing or cooking. I do meditation each night to sort out my thoughts. I keep the TV on during the day not really to watch any specific program, but to have background noise, as otherwise, it is completely silent. It seems that homesteading, off-grid living, and survival TV shows are most of what’s playing these days, perhaps to provide an escape at a time when so many people are isolated in their urban homes. Life Below Zero, Port Protection Alaska, Alaska: The Last Frontier, The Last Alaskans, Alaskan Bush People, Homestead Rescue, Building Alaska, Railroad Alaska, Flying Wild Alaska, Mountain Men, Ice Lake Rebels, Alone, et cetera and ad nauseam. Sometimes there are good ideas, sometimes bad and overtly fake ideas, but it’s entertainment. I also like to watch the Food Network and remember what salad tasted like.

I cook my meals from scratch, which takes up a good amount of time. I do get fresh dairy items from Dubreuilville, but I try recipes with substitutions from the pantry out of curiosity. I won’t get ahead of myself and say that a cookbook is in the works, but most items have turned out to be appetizing. Like many others during the pandemic, I’ve taken up bread making. The best thing I’ve made so far is everything bagels. The old toaster which was on the verge of expiring didn’t agree, and sparked up in the middle of toasting. Add that to the list of things I’ve broken this month!

I have many ideas, but not necessarily the resources or ability. Getting homesteading, prepping, survival, and craft tips on Pinterest leaves me with a slurry of thoughts. I could try soap making, herbal tinctures, sewing, one thousand different recipes…

Snowshoeing is also an effective way to pass the time and clear my thoughts, which is why I mention it constantly. This week, my longest trip was an excursion out to an old quarry a few kilometres past Clear Lake. There are so many old roads and offshoots to explore, some of which I still haven’t ventured down yet. I also attempted to take the trail over to Fox’s Den Lodge on Dog Lake, but a beaver dam had flooded the trail only a short distance down from Lochalsh and there was open water that appeared to be deeper than my boots. I’ll save that for later.

I also went on another snowmobile tour of the southern end of the lake with Roger. We checked that trees haven’t fallen on roofs and everything is in good order. The snowmobile trails still aren’t fully open, as there isn’t enough snow for the groomer to pack down, so there isn’t much ice fishing going on out on Wabatongushi yet. It’s still a mild winter. On one hand, I’m thankful for this, as living in the house has been an experiment as to what might freeze or malfunction in winter temperatures, but on the other hand, as the house is doing fine (knock on wood), I’d like more snow! Temperatures this week were down as far as -16 F/-27 C at night, but rose in the day to around -4 F/-20 C or warmer. It looks like the next week is forecasted to be warmer overall.

To answer another common question: Do I get cold? Not really. The wood stove keeps the house toasty. I own a variety of outerwear, boots, and mittens and I dress according to conditions when I go out. When I snowshoe, I get so warm that I have to take off my mittens, even if it’s -20 out! I’ve lived in worse temperatures before so it’s nothing new to me.

Thank you again for all of the comments and conversation!

If you missed posts from previous weeks click here:

13 thoughts on “Winter at Wabatongushi #3”