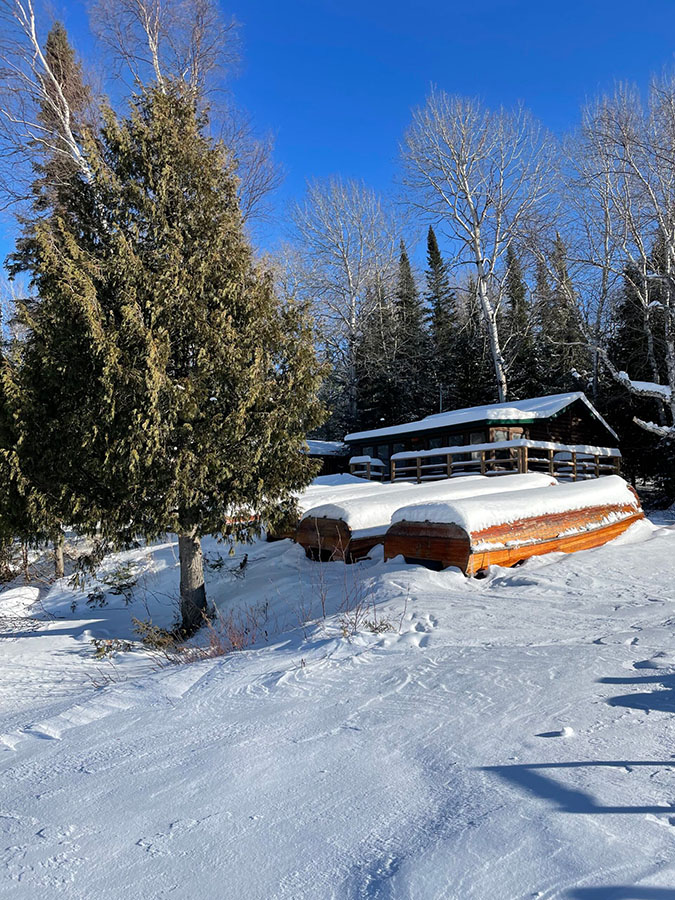 I’m back up north and back to skiing, snowmobiling, fox-spotting, and more!

Before getting into my winter adventures, I want to announce that we now have two live webcams at Camp Lochalsh! We received our second Starlink satellite Internet system and it has been installed at Camp Lochalsh, allowing us to stream higher resolution footage with more cameras. To access these cameras, all you have to do is click on the “View Live Lake Webcams” link at the top of any page in the banner.

You may see myself or a fox pass in front of Cabin #1 every once in a while, so keep a lookout!

Now, back to the bush…

A few days before Christmas, a wave of exceptionally warm weather passed through. Temperatures were several degrees above freezing and some regions saw rain. Heavy winds led to downed trees and power outages. I’d already been skiing and snowmobiling for weeks…then most of the snow melted. I was cut off from town. I packed my luggage and snowmobiled out to the 48 Road, which was impassable because it had melted down to gravel. Roger was kind enough to pick me up with a trailer to take me the rest of the way into town. From there, I drove down to the Sault to visit relatives and catch a flight south to see my family. The return trip wasn’t much easier; there were flight delays and cancellations all around, and Highway 17 was closed for a day due to snowstorms once I returned to the Sault. I finally made it back up here at the end of the first week of January.

Andy and Jim were up in Lochalsh for a few days to look after the house and have their own snowshoe adventures. It was extremely cold in early January, with overnight temperatures around -30 to -40 C (which is about the same in Fahrenheit). The three of us broke trails and ventured out on the lake but I couldn’t see half of it because my glasses and eyelashes were frozen! Those almost were the coldest days I’ve seen yet up here…last year’s record was -42 C overnight. When the weather is cold enough to almost freeze your eyes shut, that’s when it’s time to stay indoors by the wood stove!

The red foxes were quite social and came right up to us while we were sitting out on the front steps. Foxes are very curious and like getting all kinds of attention. Every time they hear a snowmobile approach, they think that someone has arrived with snacks. Sometimes this is the case and sometimes they are disappointed.

The foxes keep dropping by each day even in icy temperatures. One caught a partridge out on the trail and carried a partridge feather to my deck, then left it there after I gave her a treat. When I turned back to the window several minutes later, there were more feathers left in the yard. I’m not sure if I was being given a gift, but I did feel honoured. Now, if only they would be going after that squirrel…

I do have other ways of keeping myself occupied. It’s that time of the year again– hiring time! (If you or someone you know wants to apply, see our ads up on Indeed.ca or contact us on our Careers tab; you must already have a Canadian citizenship or visa). You wouldn’t think it, but I can’t escape Zoom calls even out here in the wilderness! I’m praying and hoping for an “ordinary” season unaffected by COVID. It’s strange to think that it’s been two years without a full staff and a full schedule of guests. It’s been an odd experience all around.

I’ve been enjoying my cross-country skis lately. The bonus over snowshoeing is that most routes are downhill on the way back to my house! Breaking trail is great exercise.

I also have been doing some reading. I received an interesting book for Christmas. So far those Bigfoots have stayed on the other side of the Manitoba/Ontario border but I’m prepared to see one around here any day now! 😉

This past week there was a decent snowfall of at least a foot of snow overnight– in some places more like a foot and a half! I’ve only managed to get the snowmobile stuck twice so far, both times in my front yard somehow. When I had to travel out to Dubreuilville to get my booster shot on Thursday, it was -25 C and no one had been on any of the trails to town yet since the snowfall, so it was a powdery ride!

It looks like the weather will be turning somewhat warmer in the upcoming week, which I look forward to. I received a GoPro for Christmas, so I’d like to start filming some of my activities to show you all a different dimension of winter at Wabatongushi.

Thanks again for reading!

If you missed my last blog from Winter in Wabatongushi Round Two, read it here!

11 thoughts on “Winter at Wabatongushi Round Two #2”