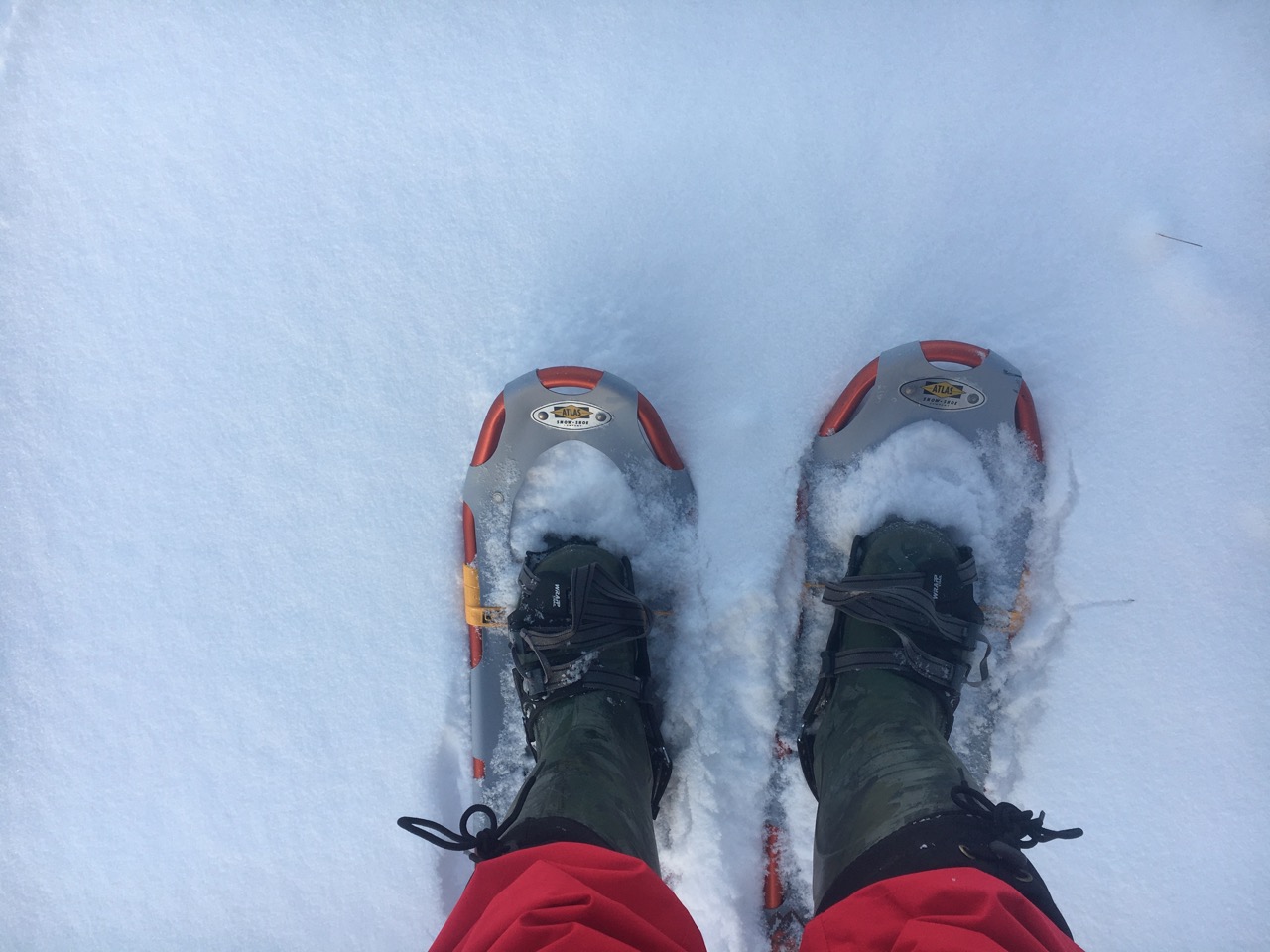 Happy New Year from Lochalsh! That’s where I’ve been hiding out in the midst of these unprecedented times. During an ordinary season, I’d leave camp at the end of October, but this year I was given the opportunity to stay through the winter and look after the lodges. Now I’m over two months into this adventure. I know I’ve stirred up curiosity and I know everyone is missing the wilderness, so I’m starting a blog.

This post will be a longer piece about the background of the venture, whereas in following weeks I’ll share shorter insights as to what I’m doing, where I’m going, and what I’m cooking. I have so much to write about that it was a challenge to pare down this introduction into something readable.

Checking on the Lochalsh cabins

The view from the Camp Lochalsh docks

Some of you have been following me on social media and already knew about what I’m doing. The number one question I’ve had so far is: Where are you living? Those cabins aren’t winterized!

Right up the road from Camp Lochalsh is the “ghost town” of Lochalsh, once a railroad and gold mining town home to a number of families and businesses (see my history posts on nearby Goudreau, the Cline Mine and the Wabatongushi Lake dam). In late 2019, the Wilsons purchased a winterized residence there. While the bungalow housed year-round residents for decades with amenities like electricity and indoor plumbing, repairs were needed, namely a reliable water source. The wood stove needed a new chimney and the roof was leaking. The exterior stairs were rotted out. Some appliances didn’t work. Satellite Internet had never been installed, and the landline was damaged. Without running water, we were unsure of the status of the plumbing.

In the spring of 2020, the idea of having someone stay the winter was floated, but making it a reality was daunting; with pandemic restrictions severely limiting revenue and local supplies, it was impossible to make a concrete timeline of preparation. On top of this, our limited crew was doing the usual camp work for the few Canadian guests who were able to visit.

The overshadowing problem, and the first task to complete before spending time and money on any others, was to find a consistent water source. The house was connected to the Lochalsh town well in years before but that proved to be unreliable. Digging with the backhoe produced no water. Finding a well drilling company that was willing to take their equipment into Lochalsh was a challenge in itself; the only willing contender drove their rigs over six hours south from Kapuskasing— and they could only come in October, leaving little time for further preparation. They hit bedrock at 30 feet, and the well was sunk to 140 feet. We spent the next week digging a six foot deep trench from the well to middle of the house’s crawlspace, then attached the pump and intake line and insulated it all…then filled the trench back in. Sadly, we didn’t find any gold despite all that digging.

Once the house had the essentials— water and a wood stove— I then had less than three weeks to gather supplies for the next six months. I already own enough gear to fill an aisle at an outdoors store, and could use all of the camp tools, so the top considerations were food and a snowmobile.

Dubreuilville, Wawa, and even Sault Ste. Marie can be very limited in grocery variety. I saw certain foods going out of stock throughout the summer, and heard of nationwide hoarding and rising prices. With two freezers and an empty bedroom in the house, I determined that it would be wise to build a pantry of dry bulk goods and frozen foods that could feed me for at least six months. Such a supply would be crucial in late fall and early spring, when road conditions are unfit for both a snowmobile and a wheeled vehicle (we had this situation recently when the roads were a patchy snow-mud mess until late May 2019; some employees and groceries had to arrive by train). I already had an accurate idea of what I eat during an average week, so multiplying that by six months gave me a minimal estimate of goods. I also researched prepping to look at what apocalypse aficionados recommended— though a significant difference between myself and most of them was that I wanted palatable everyday foods, not the cheapest, blandest stock to keep for an absolute emergency.

By the end of October, I had my shelves and freezers stocked. As for fresh dairy items and vegetables, I cut down on consumption, and planned to pick up a few items in Dubreuilville on a weekly or monthly basis. I also purchased a wide variety of first aid items and over-the-counter medications so I’d be able to treat common problems like colds, the flu, burns, allergies, and cuts. The closest health clinic is in Dubreuilville, and any serious medical problem requires treatment in Wawa or the Sault Ste. Marie, so making good decisions and anticipating dangers is important.

The other major purchase was a snowmobile. Certain roads from Dubreuilville (the Goudreau Road and 48 Road) are plowed for access to the gold mine; the latter segment after the mine, the Lochalsh Road, is not plowed unless repairs are needed at the fibre optics station at the Canadian Pacific tracks by Camp Lochalsh. There are groomed snowmobile trails that follow or intersect these roads and it is a very popular pastime in Dubreuilville and Wawa (as it’s a very mild winter so far, these trails are actually not yet open at the time I’m writing). Apparently everyone else in the province had the same idea that snowmobiling would be the only thing to do with society shut down. Dealerships couldn’t keep anything in stock and almost nothing was appearing on the classifieds. In late October, I closed the deal on a 2018 Ski-Doo Expedition Sport 550F. There still isn’t much snow, but I’ve been out for a few rides, and I can get to Dubreuilville.

In the last week of October, before Amy and Andy had to head back home, we worked on the final touches. The satellite Internet was installed. We also brought over a satellite TV dish and receiver. I scrubbed down the walls and carpets and furniture. We discovered that the washing machine didn’t work, and with no time or funds to get a replacement, I accepted I’d have to wash my laundry by hand. We installed a new propane stove and lined up replacement bottles behind the house. We brought over a generator from camp in case of a power outage. Later on in November, after their technicians returned from weeks of vacation for the moose hunt, Bell came by to fix the landline.

Enjoying a ride on a sunny day

Don’t worry, I came to a complete stop for this photo!

Gathering supplies and getting services connected was a huge part of preparation, but another aspect— perhaps the most important— was psychological preparation. I wouldn’t have set out on this adventure without first searching for a realistic idea of what it would entail.

As I previously mentioned, I have worked here since 2014. Every season, I live at camp (usually at Loch Island Lodge for the summer portion) and work on site seven days a week from May to October (bar one or two nights on the road getting supplies, and my autumn float flying vacation). I’ve explored many of the old logging roads and mines and trails and lakes. I know what the local store stocks, and the general difficulty of finding certain things anywhere in this part of the province. I’m also aware of the limited medical and social services. This was not like buying foreign real estate sight unseen, asking a camping store employee for an idea, flying to Alaska right after reading Into the Wild, or signing up for a reality TV survival competition. It was more like thinking about another day of going to work, but with a much greater extent of planning. Now, winter is a very different experience from summer, but already knowing the environment and people gave me some reassurance.

I was already comfortable being out here alone. If I wasn’t comfortable with the idea of extreme isolation, I wouldn’t attempt to stay the winter.

This brings me to my last, but perhaps most important, point about life out here. I do spend most of my time alone, but I am not the only person out here, and I’ve had amazing amounts of help from others. I’m in contact with people who grew up or lived year-round in Lochalsh and they have been very generous with their knowledge and encouragement. We all have Internet, so we keep in touch through social media. Some other individuals live off-grid off of the road and trail system, and again, have been very helpful. I have friends in Dubreuilville who live a similar lifestyle and are excited that I want to go snowmobiling or fishing with them. Having this network of support is essential and I wouldn’t be able to be out here without them.

I’d love to hear your questions and comments! If there’s a certain topic you’re curious about, let me know, and I can go into more detail or take more photographs.

24 thoughts on “Winter at Wabatongushi #1”