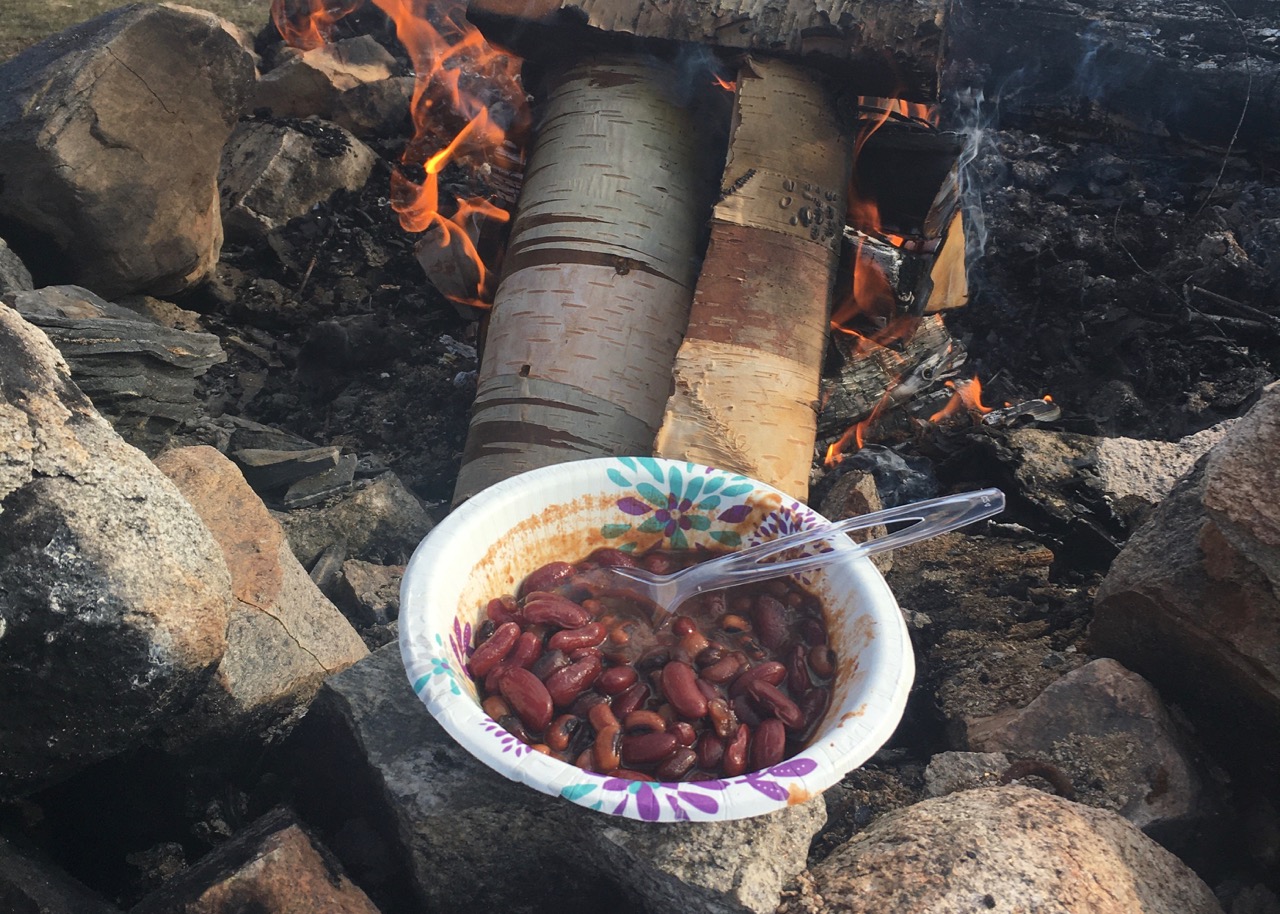 In these socially distanced days, regardless of where we live, it seems that we all share one pastime: eating lots of snacks.

Last week, I wrote about having a constant sense of psychological overstimulation out here. One of the activities that really slows time down for me and keeps me grounded is cooking– and gathering some wild treats! While the first foods that come to mind are the delicious fish from Wabatongushi and surrounding lakes, and partridge and moose from the autumn hunt, there are plenty of other foods out here. This week, I want to share with you the wealth of the boreal forest, and some of the traditional foods in the area.

In the food-gathering mindset, I find that I notice exactly where certain stands of trees and plants are, because I want to remember where the prime specimens are and not take too much from one area, and how the landscape changes along the roads and trails. Without the thick foliage and brush, rock formations and swamps are much more visible. It’s also easier to see the traces of old snowmobile trails and logging roads.

I do survive from a pantry of store-bought foods– mostly bulk ingredients for homemade recipes, as I wouldn’t have freezer room to store a whole winter’s worth of an item like bread. At this point, I don’t foresee being able to produce most of my own food supply. It would be possible, over many hours, to establish a garden and get all of the licences and equipment to hunt/trap, and of course I already like to go fishing, but the main issue is time. From May to October, there is a lot to do around the lodge!

NOTE: If you want to find these plants at home and try them yourself, please do further research first, and make sure you identify species properly. Certain herbal remedies can interfere with prescription medications, or health conditions.

Check out this video tutorial from Indigenous Sport & Wellness Ontario to see how to make the tea, and what some of the health benefits are.

There are many cedar trees around Camp Lochalsh and the surrounding lands. I crush cedar needles between my fingertips to determine the scent. If it produces the invigorating cedar scent, it will have a good taste. If it smells like varnish, it will taste like varnish! I take a portion of the needles, rinse them off, crush them up, and either steep them in a mug of boiling water for a lighter tasting tea, or boil them in a pot for a few minutes to make a stronger brew. The tea tastes more like a black tea. I often sweeten it with maple syrup. I also make it iced.

Cedar tea is excellent for respiratory health, and it’s beneficial to just breathe in the steam. The only downside of cedar tea is that it produces a resin that sticks to mugs and cookware!

I’d heard of birch tea before, but never saw anyone make it. I investigated online and it was suggested to snap thin fresh twigs into small pieces that would fit into a jar, then pour boiling water into the jar and let the tea steep gently overnight. Apparently boiling birch for too long results in bitterness, so I was nervous about that. I was hesitant to try the brew in the morning, but it had a very light and pleasant taste comparable to green tea.

Read about the historical and cultural background and the health benefits (and risks!) of Labrador tea in this summary from the USDA.

This evergreen plant grows in boggy areas. I’ve searched the shores of Wabatongushi for it before, and it was not abundant. However, there are many plants in the lowlands surrounding Margueriette Lake, conveniently close to my house. I wash the leaves, crush and tear them, and let them steep in a mug of boiling water. I also dry out leaves to brew later. After several minutes, it creates a reddish tea that has a slightly fruity taste.

Labrador tea near the shore of Marguriette Lake

This summer, the northern Ontario blueberry crop was stifled. Usually many of the staff go out to pick blueberries around the lake in August, and we use them throughout the rest of the season in pancakes and desserts. I eat handfuls as I hike. The bushes simply didn’t bloom this summer. It was much hotter and drier weather than usual. I bought a winter’s supply from the wild blueberry farm in Wawa; they were able to have a good crop by giving their plants better conditions. This situation goes to show that a certain type of wild food may not be reliable.

I make jams, pancakes, muffins, breads, and smoothies. Blueberries keep well in the freezer and also thaw well, unlike some other fruits or vegetables.

There are also raspberry bushes around, typically near the sides of the Lochalsh Road. You can also find sour cherries in places.

Wild rice grows in the Great Lakes region and has always been a crucial food for Indigenous peoples. For recipes, and to read about how Ojibwe people still harvest the rice by hand in Minnesota, click here.

It tastes more like oatmeal or a hot cereal than the white or jasmine rice that most of us cook with. It’s a hearty addition to stews, but can also be served cold with berries and maple syrup.

Personally, I don’t like to eat these and don’t preserve a supply of dried morels, but they are fun to hunt for in the spring and early summer– aside from the mosquitoes and black flies hatching at that time! I’ll pick it if someone else will eat it. The best spots are in sandy areas, so old gravel pits near the Narrows are the perfect place for finding them. They only grow when supported by specific weather and temperature conditions, so some seasons I have seen very few.

Maple trees don’t grow in this region, but you can see them around Sault Ste. Marie. We order our syrup supply for the lodge from Québec, one of the provinces that produces the majority of syrup for the country– and the world. There are many sugar bushes in Ontario, too. I use syrup in smoothies and baking, and of course for my wild blueberry pancakes! It can also be added to the French Canadian sugar pie. I think the real question is, when isn’t maple syrup appealing?

Maple sap is also good before it’s reduced to syrup. In the spring, when the sap starts running, shaving some bark off a maple tree and ingesting the sap is a good way to replenish nutrients lost over the winter (but you must limit your intake, or it will cause digestive upset).

A moose roast is hard to beat, but the meat also gives stews, chilis, nachos, and burgers a strong, distinct taste. My favourite stew combination is moose meat with barley.

I like to bake pike or walleye filets with lemon slices and onions, possibly also wrapped in bacon. The best side dish is potato wedges baked with olive oil, garlic, and parmesan. I make a pike dip for crackers by shredding up baked pike and mixing it with sour cream, cream cheese, cheddar cheese, and a variety of seasonings. I haven’t tried smoking trout or whitefish myself, but it is amazing with cheese and crackers.

Partridge pie is very tasty, and makes a filling winter meal. I bake the partridge breast, then dice it up and make a filling with thickened broth, carrots, onions, and peas in a handmade crust.

What Else is Happening This Week

As I write this post, we’re finally getting more snow in the Dubreuilville area! It looks like we’re heading into a colder two weeks as well.

The Ski-Doo is still in the shop, so I’ve been doing the usual snowshoeing. I scope out old trails on Google Maps, then go on a wild goose chase for them, then find they’re impassable…Oh well, it’s still fun. I’ve been noticing more wolf tracks out near Clear Lake and Manitou Mountain, but not directly by the house.

It’s also hiring time! I don’t have any indication of when the border is going to open, or when short-term rentals and resorts will be legally allowed to operate, but it’s regular practice to put out job ads in January or February because it can take months to find staff. We have to be proactive, assume that we will be opening in May, and prepare ourselves for a landmark season. I’ve been hiring the housekeeping/serving staff since 2017. Part of me enjoys talking to candidates and planning, and another part of me dreads inevitable interview no-shows and indecipherable resumes. This year, I’m thinking, At least it gives me something to do. If you know anyone who is interested in a housekeeper/server position or dockhand position (they must already be eligible to work in Canada, as we cannot sponsor a visa) contact us at careers@lochisland.com.

Thanks again for reading, and see you next week!

6 thoughts on “Winter at Wabatongushi #4”