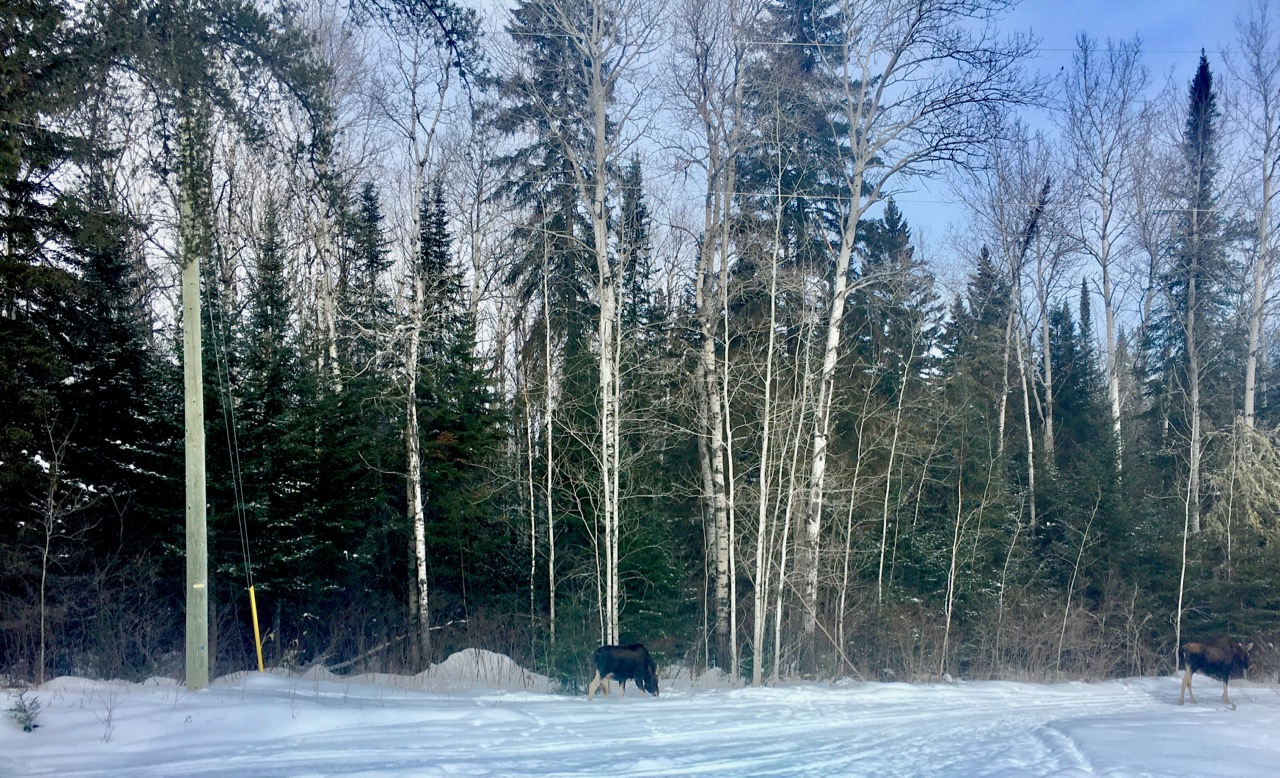 A Blog Series by Elorah

Here I am, four months into…winter? I’m not sure if it actually is winter anymore. The weather has been absolutely abnormal this year. Just a few weeks ago, I was seeing -40 overnight. In the past few days, I’ve seen rain, sleet, snow, and everything in between…along with some moose!

Being out here is quiet and uneventful, but I’ve had a few good scares this week hearing chunks of ice slide off the tin roof in the middle of the night! I do knock off the icicles and keep the area around my TV dish clean, but I don’t clear off the entire roof with the roof rake. It’s hazardous to get up on a slippery roof peak, especially when alone!

It’s been a while since I made a personal blog, but not that much changes from week to week. I got my Ski-Doo back last week, finally! After it broke down in mid-January and made it to the dealership in Hearst by February, the factory took about a month to ship out a new engine due to COVID delays. Now I’m hoping that the snow will last long enough for me to enjoy a few more rides.

To retrieve the snowmobile, I went into town for the first time in almost two months. I hadn’t realized that I’d been out in Lochalsh for that long, really— time moves differently out here, and I have enough hobbies to keep me occupied. I don’t feel as though I’m missing out on much in society these days.

Dubreuilville is the same as always, but now the lockdown is lifted and it’s possible to eat inside restaurants. I went out for dinner with Roger at LOL Resto Bar and ordered a poutine (fries topped with cheese curds and gravy). After not eating overly salty and greasy food for quite a while, my body didn’t like that, but my appetite was sated. Poutine always hits the spot!

I do get human visitors, but the most frequent callers are my little forest friends. I call this red fox Terry. Terry is a little shy— which is a good thing— but hangs around the house for several hours after dark, or pops by for an afternoon snack. The foxes and squirrels are a great method for disposing of vegetable and meat scraps (yes, foxes do like vegetables!). Sometimes I’ll glance out the window and see a familiar face looking back at me! There is another thinner red fox with slightly darker face markings and fur who is too nervous to approach the house, but walks by every once in a while. I haven’t seen the cross fox in several weeks. Foxes are very playful animals in general. When they get excited, they run around in circles like a dog. They hunt in the snow, and have a mouse-spotting fort out on one of the log piles in the yard.

I also have a fisher friend who stops by occasionally. Fishers are fairly large (I mistook this one for the cross fox from a distance in fading light) and this one looks quite healthy. Mr. Nibbles (or Mrs. Nibbles– I don’t know) is too shy to come up to the window yet.

One morning, as I was cooking pancakes, I glanced over to the front window and saw two moose walking by! These were the first moose I saw all winter, though tracks are plentiful all around the roads and lakes. I saw them again several days later– in the same manner, as I was cooking dinner, I peeked out the window and saw that I was being watched! They saw me photographing them from the window and weren’t alarmed. I didn’t attempt to go outside for better views because I didn’t want to scare them off, so I haven’t gotten good close-up shots yet.

In these warm days, snow is starting to melt. Temperatures will turn cool again, and snow is forecasted, so I wouldn’t say winter is over yet, but things are certainly slushy right now. Going out for a walk to enjoy the above-freezing sunlight earlier this week, I saw plenty of bare patches in the ditches.

The other thing keeping me busy is interviews for new staff. I’ve done my own hiring for the housekeeping staff since 2017, and this year I’ve been participating in the dockhand interviews with Amy and Andy. Zoom works out here, provided weather stays clear enough, so we figured out a script for group interviews. It was a bit of an experiment, but it’s worked so far. We received about an average amount of applications for all positions; I was wondering whether it would swing wildly in either direction— either no one applying when a start date can’t be guaranteed, or people who lost work elsewhere flooding seasonal jobs. Most of the applications were still from college students. We are lining up an (almost) all new team of individuals for the upcoming season, and their personalities and skillsets look strong. We still do not know when the border will be open, but we will have the staff waiting and ready to go as soon as the government lifts restrictions!

My family is coming up for March Break on Saturday, so I’m setting up the house for them and baking some treats. They’ll be arriving by train, as the Budd Car runs year-round from Sudbury to White River.

Thank you again for reading!

6 thoughts on “Winter at Wabatongushi #5”