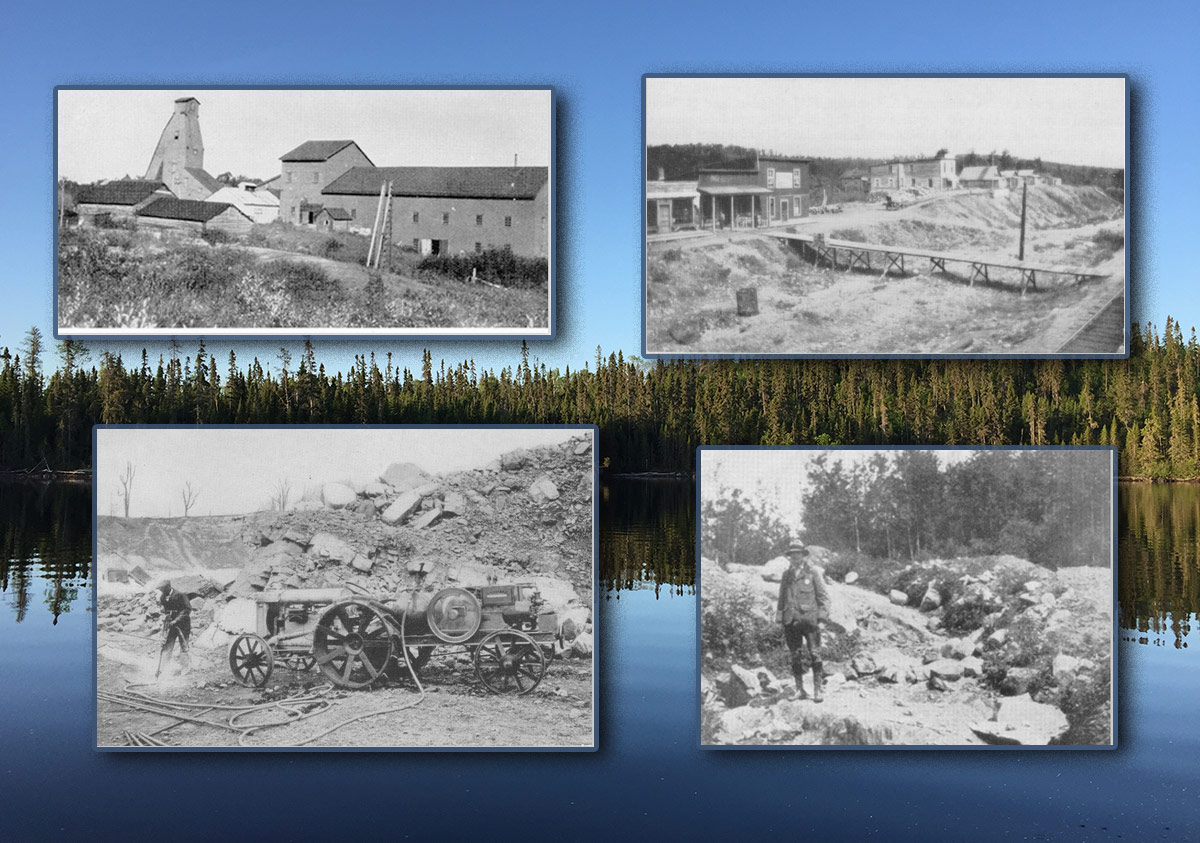 As we had such positive reception to the post about the Cline Mine, we’ve got another piece of Lochalsh area mining history for you, this time at Goudreau.

To access Goudreau by road from Highway 519, turn off on Cemetery Road just before arriving in Dubreuilville and follow this road until you come to a stop sign. The intersecting road is known as the Goudreau Road. To pass the operative Alamos gold mine and reach Camp Lochalsh, turn left. To drive to Goudreau, turn right. Until 2015, the Algoma Central Railway still operated their flag stop at Goudreau.

Surveyors and prospectors made their way into Goudreau by the early 1900s, if not a few years earlier. Before the Algoma Central Railway was constructed, access was by canoe via Dog Lake and portages or a route through Wawa Lake, Hawk Lake, and McVeigh Creek. A.P. Coleman was guided through the area by Arthur Willmott, mentioned in last week’s post to have explored the region in 1897. They wanted to know how far the iron range from Michipicoten extended, as iron mining was booming at the time. Gold was in their consciousness as well, with recent finds in Michipicoten and Missanabie spurring a prospecting rush (Coleman, 1906, p. 183-84).

However, they found something different at Goudreau. Coleman wrote, “The Goudreau lake iron formation is of special interest as containing probably the largest known pyrites deposits in Ontario, and also the only extensive and fairly pure limestones known to exist for hundreds of miles along the north shore of lake Superior” (1906, p.187).

Many of us refer to pyrite as “Fool’s Gold.” Despite this nickname making it sound worthless, pyrite has many uses. In the context of Goudreau, the Nichols Chemical Company built a plant to process sulphuric acid from the pyrite (Moore, 1931, p. 50). In turn, sulphuric acid was used in the manufacturing of many products such as explosives— especially important with the advent of World War I–– and fertilizers. To learn more about the many uses of pyrite, click here.

The Algoma Central Railway, departing from Sault Ste. Marie, reached Goudreau by 1912. A spur line connected the pyrite mine to the ACR. Railway workers lived in Goudreau, along with miners and their families (Douglas, 1995). As mentioned in the Cline Mine post, the ACR brought up payroll money, with mine managers having to pick up the money at Goudreau, leading to robbery attempts by Cline mine employees. By the 1920s there was also a road for carts and vehicles between Goudreau and Lochalsh, and this allowed people to access both the ACR and the CPR trains and travel between the mines.

Another sobering event decreased activity in Goudreau in this era. An epidemic of influenza led to the deaths of many families (Douglas, 1995).

However, Goudreau did not disappear along with the pyrite market because the ground had more to offer!

In 1918, J.W. Webb found gold on his pyrite claims near Webb Lake and this would be the McCarthy-Webb property. (Gledhill, 1927, p. 53). Another notable property was the Morrison claim on Goudreau Lake (Burrows, 1922, 42-44). A top spot was found by fur trapper Thomas Murphy in 1921. The story goes that while trapping in April, Murphy “strolled away from the fire, after having lunch, to some high ground on the north side of Murphy lake. On finding a quartz vein he scraped away the moss, finally uncovering the rich shoot of coarse gold that started a new wave of prospecting in the area west of Goudreau” (Gledhill, 1927, p. 65-66). Local businessmen partnered with him, and the claims were optioned by a Toronto company and known as the Goudreau Gold Mines, Ltd. Crushers, mills, an assay plant, and the sleeping and cooking facilities were all on-site. In 1922, the Ontario government constructed a road from the Goudreau Gold Mines to the ACR Goudreau stop (Gledhill, 1927, p. 65-66).

The nearby Cline Mine, previously discussed here, was considered to be within the same mining region and added greatly to the gold output from the area.

Forest fires over the past decade made mining somewhat easier— there was “little timber left excepting in the swampy areas or near the waterways” (Gledhill, 1927, p. 53).

World War II would be responsible for the declining demand for gold which closed the mines. From 1958 onwards, Algoma Steel re-opened the pyrite mines sporadically, and gold mines came and went (Douglas, 1995). Today if you drive down the Goudreau Road towards Lochalsh, you’ll see the infrastructure of the Alamos gold mine currently operating.

A 1927 mining report shows that some workers in Goudreau were aided by what was cutting-edge technology at the time.

One air-driven drill required the services of three men for the various operations, such as sharpening the drill steel, attending to the compressor, using the drills, and in the removal of the blasted rock. Air from the compressor was utilized to supply the draft for the blacksmith’s forge, thus saving the services of a man and the cost of a hand blower. The hotter fire made possible by the compressed air resulted in a quicker and better sharpening of the drills. Portable pneumatic drill outfits of this type are a distinct advance on hand-drilling methods, both in the amount of work done and in the cost of the work, air-drilling being about 50 per cent less expensive than hand-drilling […] Water-pump attachments are also possible, such pumps being useful in unwatering shafts and trenches. The advantages of the pneumatic drill over the hand drill are clear when one considers that a person unskilled in rock-drilling can drill more and deeper holes at almost any angle with an air drill. Being able to point the holes at angles that would be inconvenient with hand drills results in the breaking of more rock in a given period and in a saving of dynamite. Gasoline tractors have been used to draw the compressors over bush roads and also to furnish the additional power needed in hoisting rock (Gledhill, 1927, p. 55-56).

In the 1920s, dams on the Michipicoten and Magpie Rivers provided the electricity for the Goudreau mines. Lines ran from the High Falls and Steep Hill Falls plants (Gledhill, 1927, p. 54-55). Sometime between 1927-1934 Wabatongushi Lake was dammed to contribute to hydro power (see last week’s post).

The book Northern Algoma: A People’s History records the words of Fred Gatz, born in Goudreau in 1934. He recalled that there was a one-room schoolhouse with a teacher who arranged for social events, such as team sports and dances. Teams from the mines and ACR work crews competed and children from Goudreau were known for their baseball skills. In the summer, Goudreau residents could drive down to Lochalsh to see a movie from a travelling projectionist while eating snacks purchased at the Lochalsh store. Gatz remarked, “There was not much else to do, you gambled or you drank, or you did both” (Douglas, 1995).

During World War II, the Canadian government built detention camps in remote places. Prisoners of war who were not considered dangerous were used for mining, forestry, and railroad work. Italian and German POWs “were put to work for the ACR carrying out maintenance work along the line, for which they received a small wage, room and board, and cigarettes” (Douglas, 1995). At first the citizens of Goudreau were wary of the POWs, but in time some of the POWs were given the freedom to go partridge hunting. Gatz recalls the POWs being friendly to him as a child (Douglas, 1995).

We haven’t had a staff adventure to Goudreau yet. Once we do, we’ll post some photos!

However, other people have visited over the years and taken photos, so enjoy the following:

We’d like to thank everyone for reading our history snippets! If you have any further information, comments, or memories, please comment below (after the Related Articles) or send us an email!

Our other Lochalsh Local History posts:

2 thoughts on “Lochalsh Local History: At Goudreau, Not All That Glittered Was Gold”