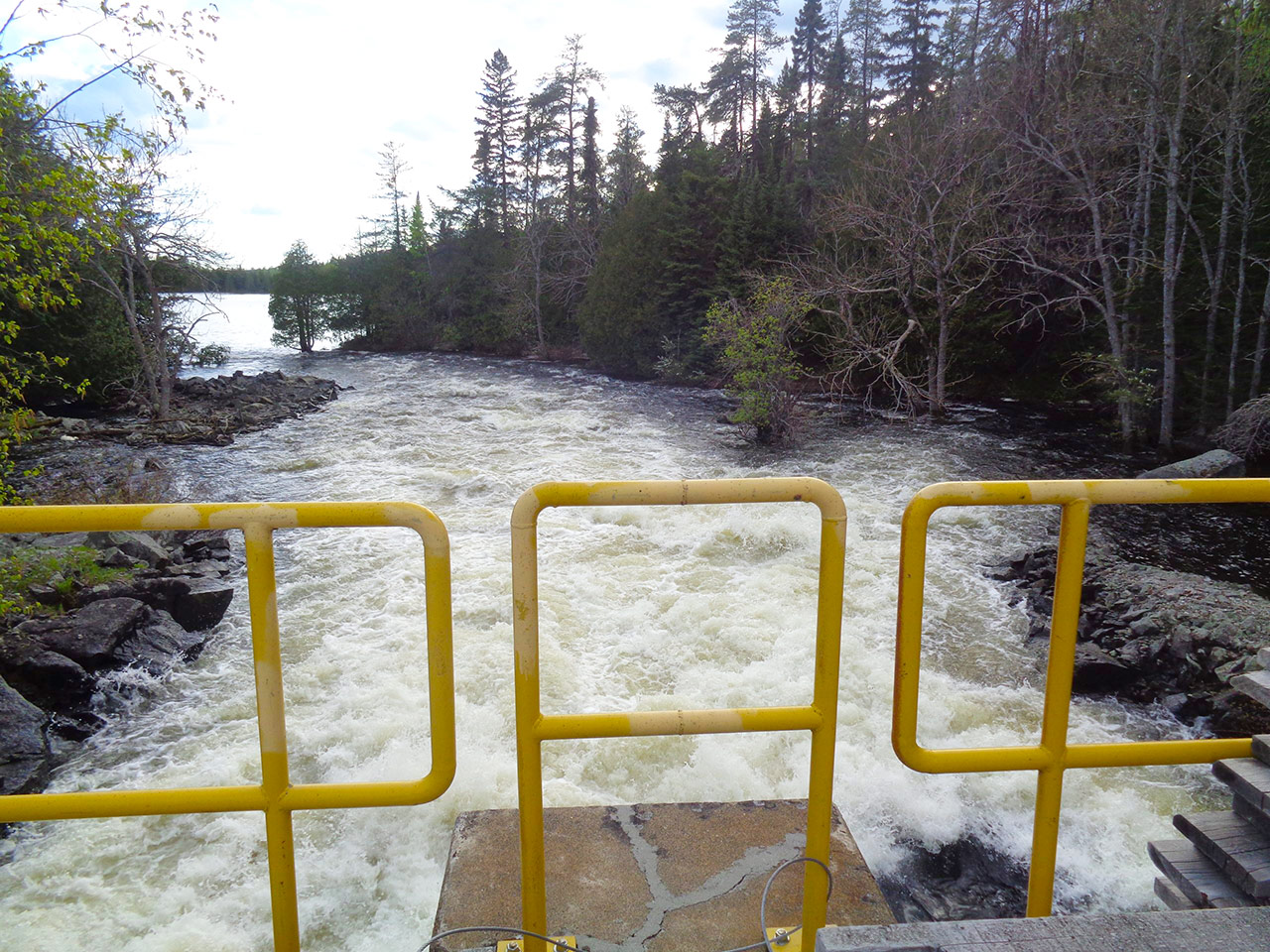 Near Loch Island Lodge, a bay of Wabatongushi Lake narrows into a dam, and the water spills over into the rapids of Glasgow Lake, our top portage destination. Another portage leads to Loch Lomond. Many guests have asked us when the dam was built and how its construction changed Wabatongushi’s depths and shorelines. In this post we’ll look at the history we’ve uncovered so far, and reveal a relevant photograph which we believe is the oldest to exist of the region!

Wabatongushi Lake is the headwaters of the Michipicoten River, flowing out into Lake Superior. Heading north up Wabatongushi Lake, one can access Oba Lake, and from there the rivers which lead to James Bay and Hudson Bay. The area where the dam is now was an important portage point for people following those waterways.

Archaeological discoveries at Twin Rocks (which you can read about in a post here) show that Indigenous people had lived on the shores of Wabatongushi thousands of years ago. In more recent times, Wabatongushi Lake was a stop on a popular canoe route used by Cree and Ojibway people, fur traders, missionaries, and prospectors moving between Sault Ste. Marie and the far northern portions of Ontario.

*The spelling of Wabatongushi changes through the years— this is due to English speakers trying to write the Ojibway language in an English alphabet!

The Portage in Written History

The earliest written record we’ve found that records Wabatongushi Lake dates to expeditions between 1875-1881. Government surveyor Robert Bell and his party were mapping the canoe route from Lake Superior to Moose Factory. At the same time, the Canadian Pacific Railway was being built through the region. They published their report and maps in 1883. At this time, curiously, surveyors described what is now the Lochalsh Bay vicinity of Dog Lake as a separate water body from Dog Lake. They called this lake and its surrounding area Mattawagaming (an Ojibway word related to “branch”). Lochalsh didn’t exist yet!

Bell wrote, “From Lake Mattawagaming another canoe-route branches to the northward and enters Lake Wabatongwashene, which may be regarded as the source of the Michipicoten River” (1881, p. 3c). On this short portage, the surveyors examined the rocks between the shore of Mattawagaming up to Wabatongushi.

The next surveyor to come through was E.B. Borron. By this time, the CPR was fully operative in the region, and Borron’s goal was to explore the newly exposed rock cuts alongside the tracks, and any other relevant spots, to see what might be of value.

Borron doesn’t mention the portage specifically, but he didn’t have a good time canoeing on Wabatongushi Lake:

“The next point visited, but somewhat hurriedly examined, was a large lake called Wabatonguishene. It is situated a few miles northwest of the western extremity of Matagama, or Dog lake, and is the source of the Michipicoten river. During the exploration of this lake the writer contracted a severe cold, which compelled him to return to Missinaibi sooner than he otherwise would have done” (p. 243)

The discovery of gold at Wawa Lake and Missanabie led to a prospecting frenzy in the region in 1897. Willmott was sent out by the Ontario Bureau of Mines to observe the situation and to correct Bell’s and Borron’s geological notes as needed.

According to Willmott, the reports from the first small gold discoveries “were the foundation for most sensational articles in Canadian and American journals, many referring to the district as another Klondike. Men began to arrive from all quarters of the continent, and even women came to the district as prospectors” (p. 184). However, many left in frustration when they found out that there weren’t “nuggets on the shores of the lakes which could be shovelled into bags without getting out of their canoes”— life wasn’t so easy (p. 184)! As described in the Cline Mine history from last week, those who were more determined made their way via the CPR train, steamboats, canoes, and “tote-roads” made by loggers and railroad crews. Willmott suggested that the bush trails could be turned into winter roads to transport mining machinery (p. 186).

After Willmott inspected the gold claims around Missanabie, he decided to go back to Michipicoten via the Magpie River. To do this, he had to portage from Dog Lake to Wabatongushi Lake to Oba Lake. He explains in his report that

“the northern arm [of Dog Lake], formerly known as Mattagaming lake (Branch in the Lake) is now called Loch Alsh, from the C.P.R. siding of that name. This arm receives the water of Wabatongusheen lake, the headwaters of the Michipicoton river” (p. 187).

So Lochalsh became “Lochalsh” by the late 1890s!

Willmott also wrote, “Wabatongusheen is surrounded by low hill well wooded with spruce and poplar, though burnt in a few places. The lake is named from the sandy narrows connecting the two parts. It is 14 miles long” (p. 198). Today we have the measurement as 22 miles long.

When Willmott and his crew reached the portage between Dog Lake and Wabatongushi Lake, he described the scene as: “The portage begins in a sandy bay and passes at once over the railway track and up a steep hill. It was crossed in 13 minutes with a heavy pack” (p. 197)

Willmott took a photograph at this point to include in his report. This photograph is the earliest that we know of for the Lochalsh/Wabatongushi area and was quite an exciting find!

With mines rapidly being built from the 1890s-1920s around Wawa and Goudreau-Lochalsh, waterways were dammed to produce the required electricity. High Falls in Wawa (the Michipicoten River) was one of these major projects. Surely many of our guests have stopped here on their way up Highway 17!

In 1927, T.L. Gledhill recommended that other spots on the Magpie and Michipicoten rivers be dammed (p. 55). In 1929, the Department of Lands and Forests, now the Ministry of Natural Resources and Forestry, noted that Wabatongushi would be an excellent spot (p. 79). What happened in the next few years isn’t clear, but in his 1935 mining report, E.M. Burwash writes of a dam existing on Wabatongushi (1937, p. 29). The accompanying map (see below or click here for the full-sized document from the Ontario Geological Survey) shows a dam where the Glasgow dam exists today, plus the other dam in hiding behind Otter Island.

We don’t have an exact date for the dam and don’t know how many phases of construction there might have been, but there was certainly a dam in place by 1934.

Locally, we’ve heard quite often that the dam made the levels of the lake go up by 10 feet— but no one knew the date of construction or how to prove that specific number. Many bays such as Patterson are very shallow and wouldn’t have existed with water so low, so Wabatongushi would have looked much different.

Currently we’re searching for maps that show accurate pre-dam shorelines and/or water depths so we can investigate how the landscape of the lake changed from the dam. Maps from the 1800s-1930s exist but are not drawn to scale or do not provide enough detail to compare to modern maps. The earliest aerial photography the government has on record is from the 1950s.

Wabatongushi Lake itself did not hold high interest among government departments funding mapping efforts— the Lochalsh mining area to the south was mapped every few years and the Ontario Air Service base was just further north at Oba, so from a documentary standpoint, Wabatongushi seems to have been the unexciting middle ground. The townships it covers have minimal records compared to those explored in depth for minerals.

If you have any insight into the history of the dam or would just like to share your memories from Glasgow and Loch Lomond…let us know with a comment below (after the Related Articles) or an email!

Bell, R. (1881). Reports by Robert Bell, LL.D, M.D., C.E. on the geology of the basin of Moose River and the Lake of the Woods and adjacent country. Dawson Brothers.

Borron, E.B. (1895). Mr. Borron’s Report on a Section of the Height of Land Region Northeast of Lake Superior. In Fifth annual report of the Ontario Department of Mines, (pp. 241-258). Warwick Brothers & Rutter.